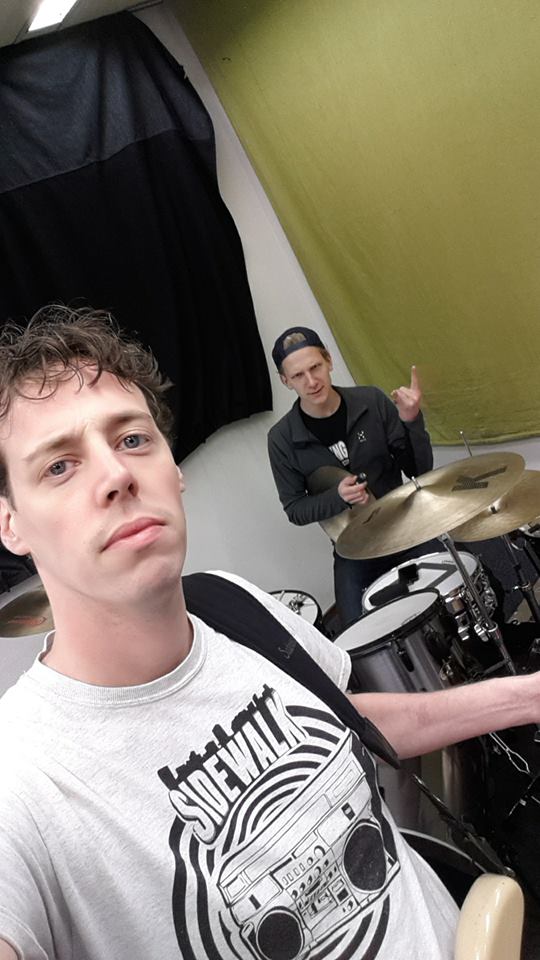 Pieter got interviewed by the awesome webzine “What Happend To Your Band?” You can read it here or in a nicer lay-out at: https://whtybpress.com/2017/12/20/introducing-the-punk-rock-band-sidewalk/They also put some songs in the interview so you can hear what they were talking about

December 20, 2017 by WHTYBPRESS
Sidewalk is a band for those who love punk rock from the 90’s. Inspired by bands such as Pennywise, Bad Religion and Swingin’ Utters, the band has been on the road since 2008! I got the chance to talk to Pieter, (bass and backing vocals), about touring, releasing an EP and the band’s upcoming projects!

Hello Pieter. Thanks for taking time to answer a few questions for WHTYB! Could you please introduce yourself, as well as your band ‘Sidewalk’? Hey Valentine! My name is Pieter. I’m the bassplayer and last founding member in Sidewalk. I also do backingvocals and the leadvocals in our song ‘What The Fuck Is Wrong With You’. It even has got some French lyrics in it. Sidewalk is a punkrock band from Utrecht, the Netherlands. We started at the end of the summer of 2008 as a side-project for the other bands we had. The original drummer, guitar player and I had played in several bands and small projects before and this would be our next short project. We were planning on writing songs and send and practice them via internet and then practice one time to play a few shows. It turned out to be our most successful band. We’ve played over 175 shows in 10 countries. Our style would be well described if you say we’ve been mainly inspired by the 90’s California punkbands. With the change in line-up the style has been quite diverse but with the same main plan, if you ask me.

Your band released in August 2017 a 4-track EP named ‘Here and Now‘. Can you tell us more about this release? How would you describe it to someone that has never heard your songs before? Nice question. This is the first release in our new line-up. After a lot of years we had a change on guitar. That also meant our main songwriter had left, so it was going to be different from the end of 2016 on. If you haven’t heard our songs before I think this is the perfect EP to start listening to us. Only thing is, I think it is the best we did. I’m still happy with most of our recordings, but this one is the best and gives a really good impression of all Sidewalk did. It’s got sing-a-longs, it’s got whohoo’s, it’s got some fast skatepunk, there are backing vocals and guest vocals. It’s pretty complete. The funny thing is that we have no songs on it which are written in this line-up. We are writing our first songs with Joralf on guitar at the moment. There are two songs on it from our early era. Confession and Teachers were written in 2008 and 2009. Fuck Knowledge and Is This What We Need were written in 2016 in the old line up and the last songs we worked on with the previous guitarist. So, it’s wide!

I had the chance to listen to it and review it for WHTYB. Therefore, my favorite track so far is ‘Is This What We Need‘. If you had to pick one track that best reflects the spirit of this EP, which one would it be and why? That is a terribly hard question. All songs have their own things and I can’t put in here that there is a bonus track. I really would love that song if it was somewhere on there. But my personal favorite is “Fuck Knowledge”. I really love how the guest vocals turned out and it’s one of the recent songs, but it really has got the ‘old’ Sidewalk vibe. Also the choir thing in the end is great, it’s so cheesy! The lyrics are about the sexual education in the Netherlands which are introduced when kids are aged three. It’s not like education about the real thing, but about starting to explain differences between boys and girls, but we took it out of context. The original lyrics used to be a lot longer, but we took out some parts because it would be too long and get boring.

Let’s talk about your August tour through Europe. What is your favorite memory from this tour and what city were you most eager to discover? It’s so hard! Why are you asking me these questions? No seriously, it’s so hard. I love being on tour and it’s all so great! Well, most of it is great, even the not so great parts. It’s weird that sitting in a van for hours is so much fun. I do like driving, so a lot of the driving is on me. That is good because it keeps me busy. This last tour was very special because it was the first time we did a tour with another band together. It took a couple days but we grew closer together and I think it will give us a very special relationship forever. Thanks MAZONIT! Tèmpête de feu! Or something like that. Gerko stepped out of the van on the second day of the tour, he was sober, and twisted his ankle very bad. We had to go to the hospital, he passed out at our sleeping address (3 hour drive later) and we went to the hospital again a day later and waited so long that we almost missed the show. He sat in a lounge chair and it was working out just great! An amazing experience. Crazy things happen and just role with it. That’s my greatest memory of the tour, of all tours.

In the regular life we all have jobs and/or school and obligations. Being on tour is just so different and it’s like you can do what you dreamed of since you were a kid. The swimming in the Adriatic sea and a lake in Germany were probably the best things. Really relaxed and a lot of fun with all guys and girls together (even Gerko walked a little bit into the sea with a bag around his plastered leg). Arlon wasn’t that great. The people at the hospital weren’t too quick, so we waited forever and never saw the city. We didn’t see a lot of the places we went, but I loved going to Carrefour and the gasstations along the road. I would like to go back to Cervia, it’s got sea and I think they have nice restaurants and the wetter was good.

What are Sidewalk’s upcoming projects? Can we expect another tour or release for 2018? We are taking it a little slower then we used to do. We still plan to do enough shows but we’re gonna tour for shorter periods. We are re-discovering the writing process with our new guitar player. We don’t know how it will go, so we don’t know if we will get to a new release is 2018. At the moment we are planning on 4 days to the north. Maybe Denmark or Sweden. We will also come to France. We will play in Bobble Café near Lille on the 6th of January. It’s gonna be fun, it will be with Chuck, no vices and some other bands. You should come over, too!

To finish, what is one lesson you’ve learned that you think is important to pass onto other bands? Be respectful and friendly to others. It’s not only for people in a band, just for all people. There’s no need to be an asshole and most of the time it won’t get you where you want to be. Especially in a band. If you want to play shows and have the chance to get back to a venue. You can’t fuck up the entire place and expect to get to play there again. I believe in the DIY/DIT (Do It Yourself/Do It Together) ethos. Let’s keep our scene alive and be honest to each other if we work together.